Let’s look at some of the briefs that are part of my assignment. Here’s one from this year’s D&AD Young Blood awards: 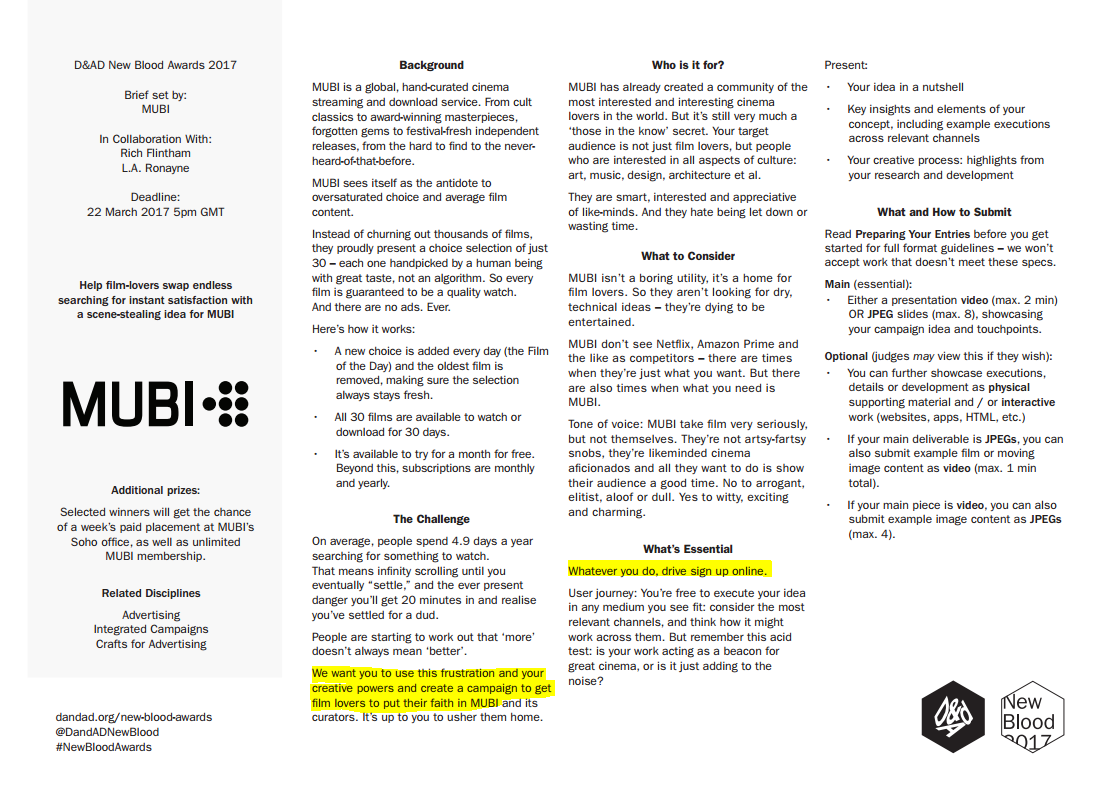 “Whatever you do, drive sign up online” — Huh. Here’s two from this year’s YCN-Awards: 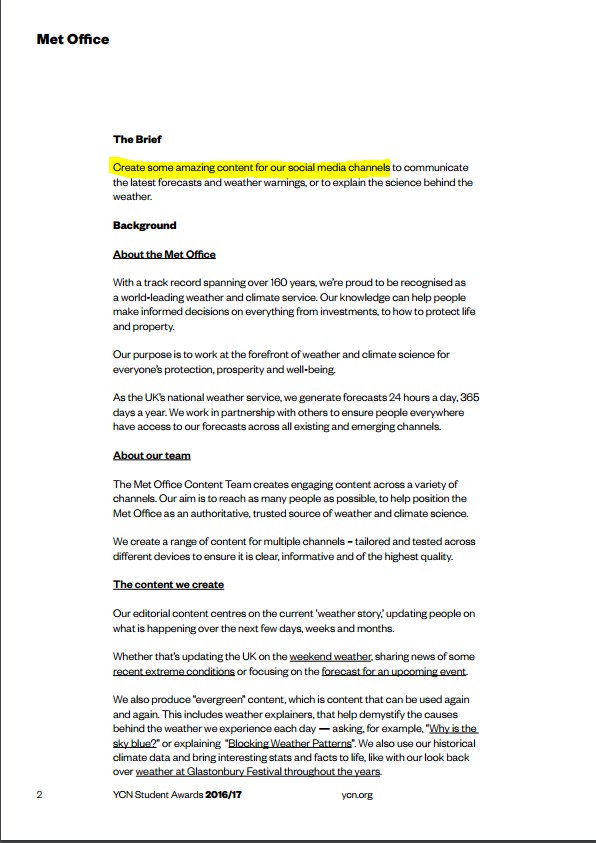 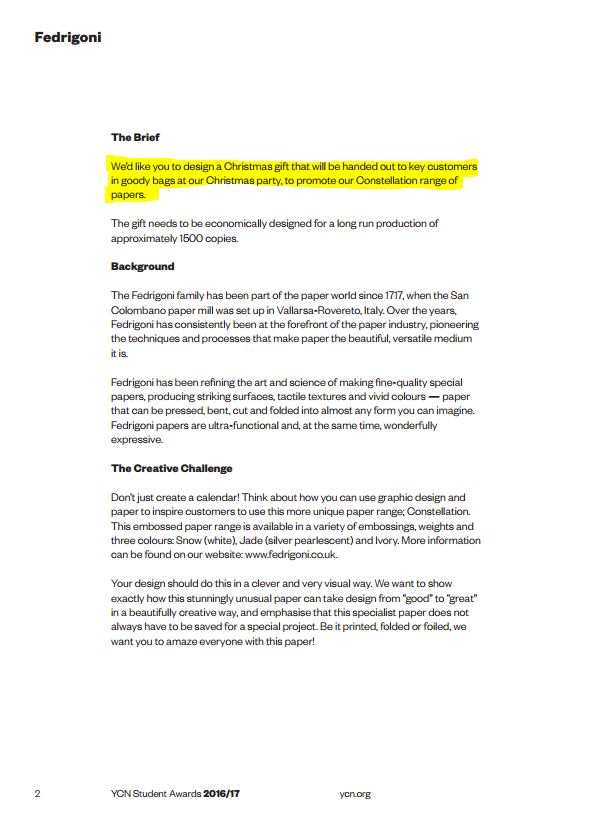 Notice anything about these? It sounds like they’re each asking for a very specific piece of design work that will directly benefit their business. A campaign to “drive signups online” for a streaming startup. A “Christmas gift that will be handed out […] in goody bags to promote our ‘Constellation’ range of papers” for a boutique paper company. Some “content for our social media channels” for the Met office. Sounds to me like the kind of specific, target-oriented work you would normally hire a designer for.

Design competitions are a polite way of asking for free work

But hiring designers is expensive, so why not get a bunch of students to do it for free? What would normally be an expensive design commission becomes a “creative challenge” — that sounds fun, right? And who would you ask for money if they’re having fun! And if you’re lucky enough to win, you will have the honour of seeing your design used in the real world — Just think of all the exposure you will get from that.

Except of course, the company doesn’t give a shit about your career. They’re here to minimise cost, and a design competition is a great way to do exactly that: They get not just one, but potentially hundreds of young designers to develop solutions to their business problem for free. If one of them happens to be good, they get to profit from it forever while you get nothing.

And it’s not like these companies can’t afford to pay people: Mubi, the startup looking for a campaign to drive online signup, is worth a hundred million pounds. Fedrigoni, the paper manufacturer asking for a Christmas gift took eight-hundred million pounds in revenue in 2016. The Met office reported a revenue of two-hundred and twenty million pounds in 2014. They don’t mention that in the brief, of course. Why? Because they’re here to screw you. They don’t care about your career, the only reason they participate is to get some free labour and move on.

If you’ve ever done freelance work, you know what it’s like: You get the client to sign your contract. You ask smart questions to pinpoint the problem they’re trying to solve. You speak to the people who will be using whatever you’re selling. You gather the data. New problems come up. You prototype, you test, you ask more questions until you arrive at a solution. You make the case for your solution to the client. You get paid.

Now, let’s see how a design competition works: You get handed a brief that has a lot of flowery language and few actual facts. You try to guess what the jury will want to see. You make a something that looks pretty. If you’re lucky you might get a voucher.

That, friend, has nothing to do with design.

They’re hurting all of us long-term

We’ve established that design competitions are a glorified way of asking for free work. That should be reason enough not to participate, but the long-term damage these competitions do to the industry goes further. By legitimising free work as the way to establish yourself in the design industry, we’re shutting out talented people who simply can’t afford to work for free. What if you’re a young woman with a kid to take care of? What if you’re working class, your parents can’t support you and you’ve got rent to pay? What if you’re an immigrant who needs to have an income to be allowed to stay in the country? These people are smart, and when they realise the design industry expects them to work for nothing they’re not going to stick around.

If we don’t do anything about this, we will end up with an industry that only represents the most privileged parts of society, and not the people who are going to be using with our work. We need to keep the design industry open to anyone regardless of their social background, gender or nationality if we’re going to stay competitive.

This is why it is important to insist on getting paid for your work even if you could afford not to: It hurts not just you but all of us (including the people asking for the free work) by making the industry less diverse, and thus less effective in the long run.

… and frankly, we don’t need them

50 years ago, doing unpaid work for a design competition might have been your only real shot at getting your name recognised — but we have the internet now. Chances are you have more people following you on Instagram than will ever come to an award ceremony. And the people who follow you online are doing so not because your name came up on a shortlist, but because they genuinely care about your work. They’re the ones that will come to your exhibition, they’re the ones who will buy your book, they’re the ones who will support you and your work long-term. Social media lets you engage with your audience on your terms, independently of anyone else’s platform.

The people running award ceremonies know all this, of course, and it terrifies them: The continuous stream of unpaid workers their ad agencies have relied on for 50 years is about to dry up. That’s why they’re trying everything to convince us (and our teachers) that their awards are still relevant — they’re not.

What can we do?

Let’s stop participating. Spend the £20 it costs to enter the D&AD awards on some new materials instead and get to work. Share your work online and build a sustainable audience there. If a competition brief is part of your course, do the work but don’t submit it, and let your teacher know why. You and me have skills that are in demand everywhere, so let’s stop wasting our time on those trying to exploit us 🖕

This article was first published on Medium