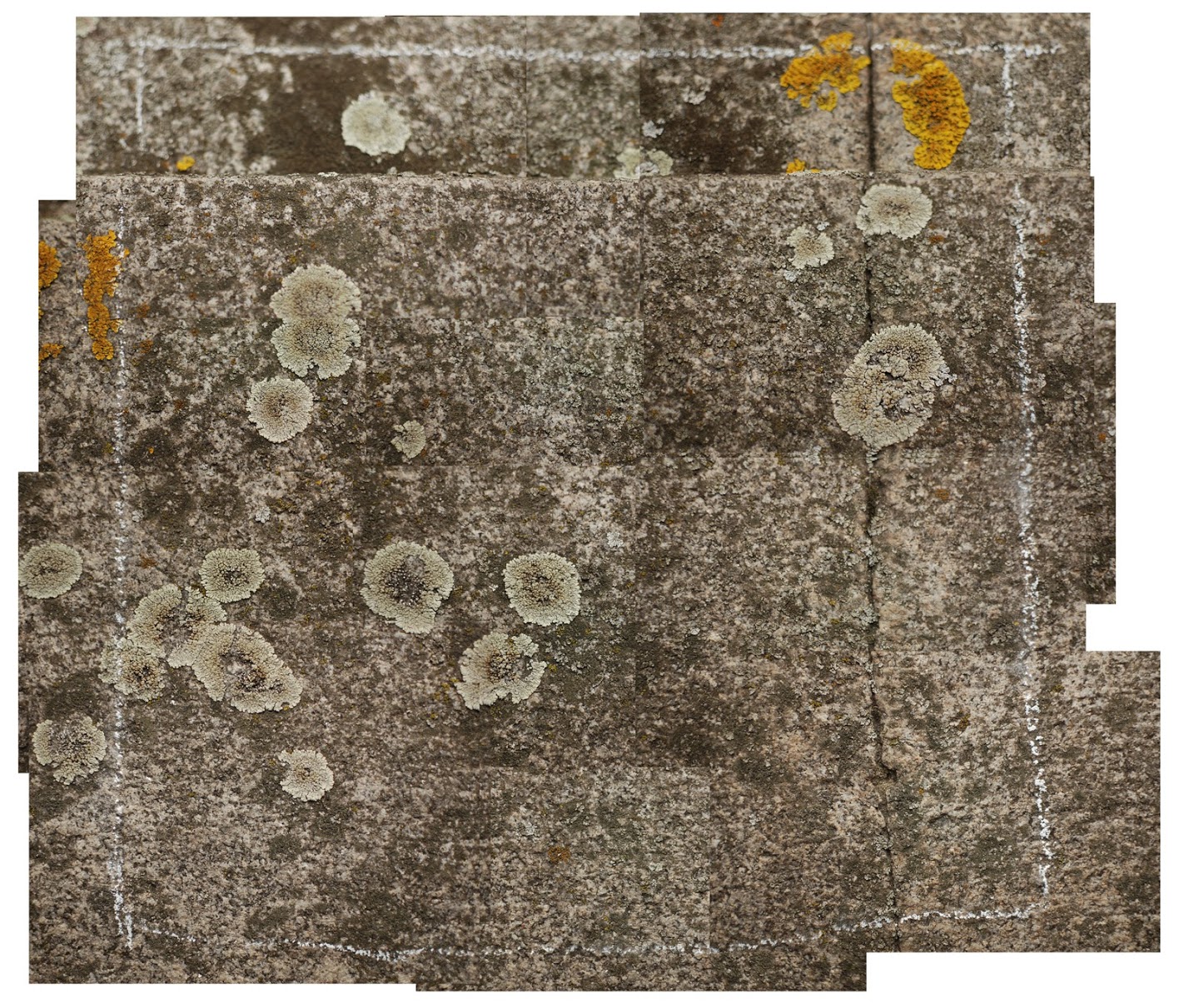 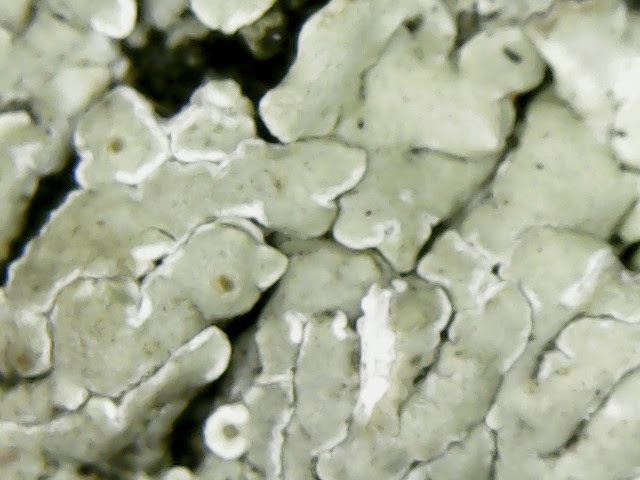 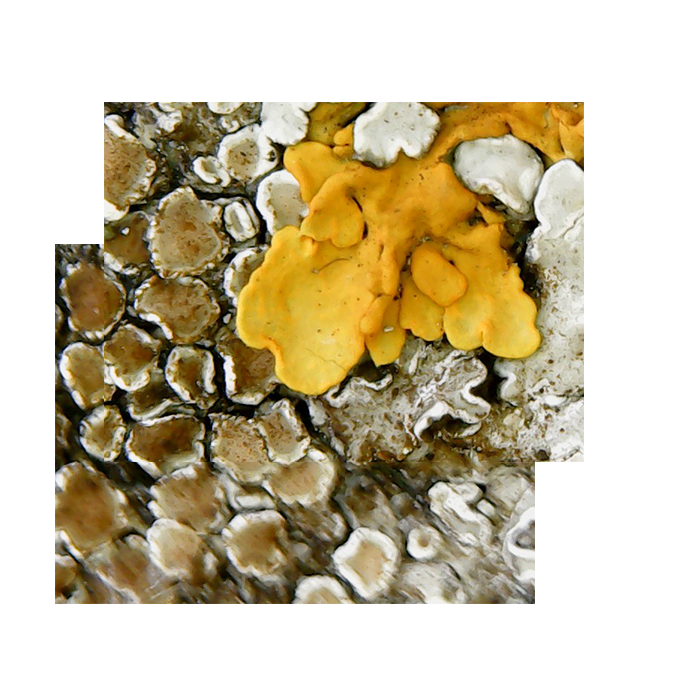 Encouraged by Friday's results, I go back to the embankment to take more microscope photographs. If I take many images of the same area, I can stitch them together in Photoshop and generate a much higher-resolution image. After a few hours, I have taken 2,764 images.

After about 20 hours of arranging these images (testing the limits of both Photoshop and my computer), I end up with a number of collages like these: 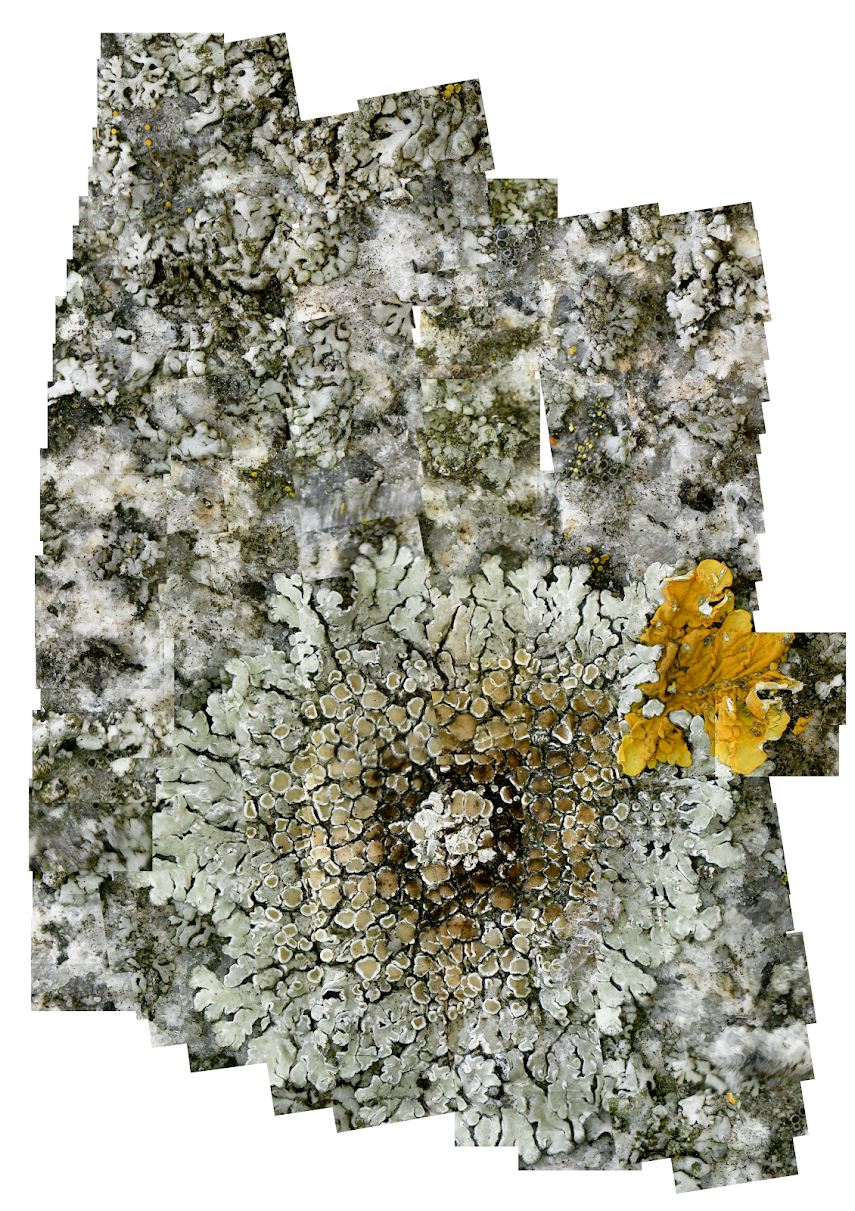 When I took these images, I was doing my best to move the camera in straight lines across an area. The collages show how difficult this is to do - the lines meander from left to right, the images are rotated by varying amounts, covering some parts of the surface repeatedly while leaving others blank.

I'm also finding some other artifacts related to lichen. There's a database of every recorded lichen in London, with all kinds of rich metadata attached:

The section of database (limited to London) I downloaded has 2,548 entires. To save space, various columns are omitted in the example above.

Also, Matt points out that the lichen in my images are forming Turing Patterns. Turing patterns are a mathematical concept that describes how patterns found in nature (such as stripes, spots, growth patterns) can be described using reaction-diffusion (which is a mathematical model that describes the mixing of chemicals). 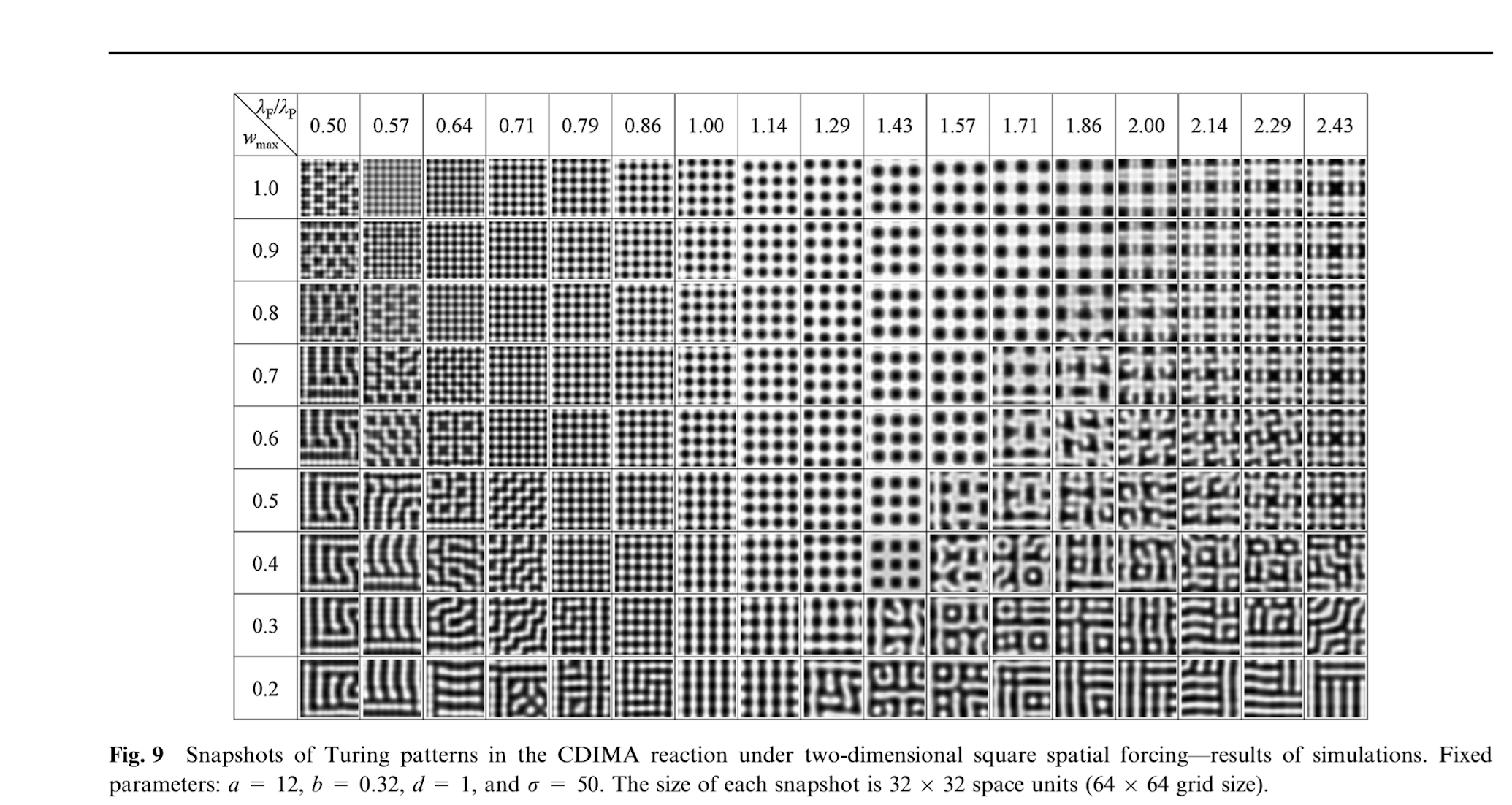 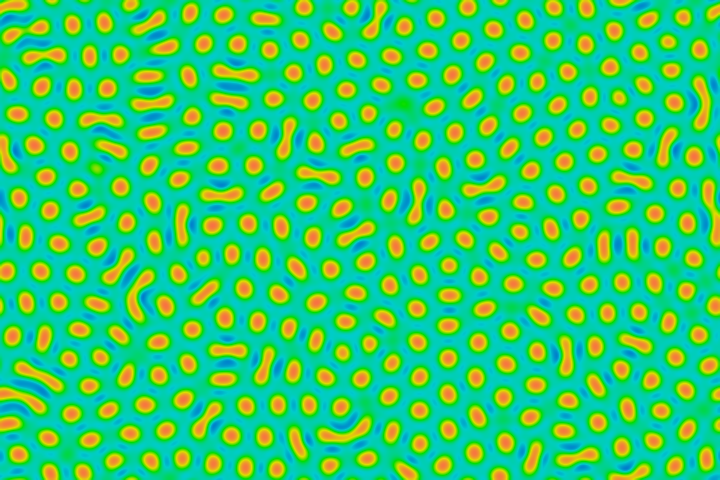 A definition of illustration: Any image that takes a communicating role in a text. Text meaning words or images or both. Catrin did a lot of work on different depictions of St. Jerome in his Study, which is detailed here. 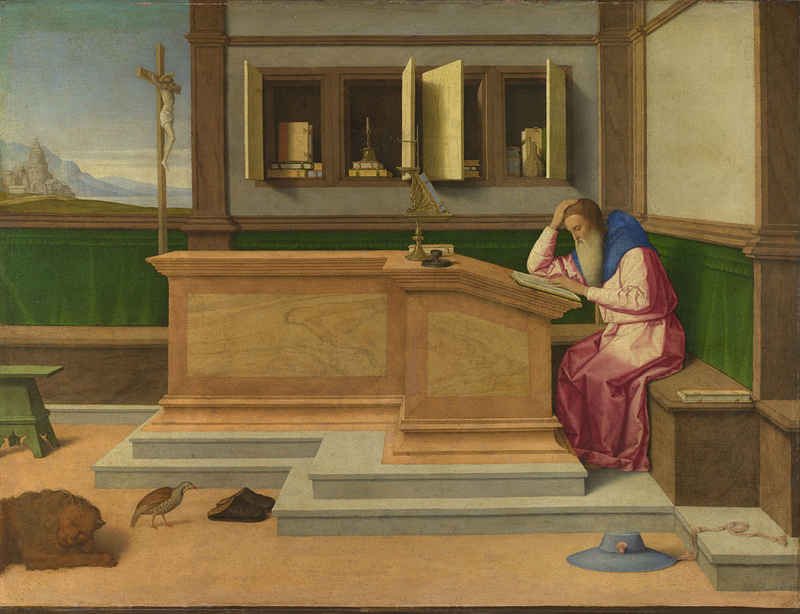 Constructing an argument with images

Illustrations that are used in art history writing. A mnemonic: An image to remind us what a painting looks like. Doesn't have to be a very good reproduction. The other way is evidence — here's proof that this painting really exists. Both of these aren't very exciting.

Images arranged on a timeline: a visual argument

You start seeing images referencing each other (chronology)

Details of different images next to each other**

David Carrier (2000): The Aesthetics of Comics

Talks about the idea of concatenation of images: Whenever we see images in the same context we start making connections. The visual essay can build on this.

Introducing a new (diagrammatic) voice to make an argument

Semantic Sesseation: When you say a word over and over again and it stops soundning like a word. The same works for images: Image becomes a pattern. Graphic novels have this convention where a full bleed image is timeless. See also Scott McCloud (1993): Understanding Comics.

We can use devices like this (from graphic novels) to make critical arguments.

Using book rythm, pacing etc. If the reader thinks they know what's coming, you can emphasise a point by making something different. All of this is repetition.

Spacing also creates hierarchy. You can do headline, body copy and sidenotes with images. Using typographic conventions with images. All of the structure of an essay is still there, you can use it with images as well. However, be aware that this hinges on reading direction.

Pulling out parts of the image (through tracing, distortion, etc.) to make a point.

Talks about ways to write essays: One of these is the list (i.e most of the stuff above). Visual essays allow us to demonstrate arguments rather than describing them.

Overlaying images that have visual similarities.

Pull in images from a different context to make comparisons

Cut out parts of the image. You draw attention to what's been cut out, and also the stuff around it. 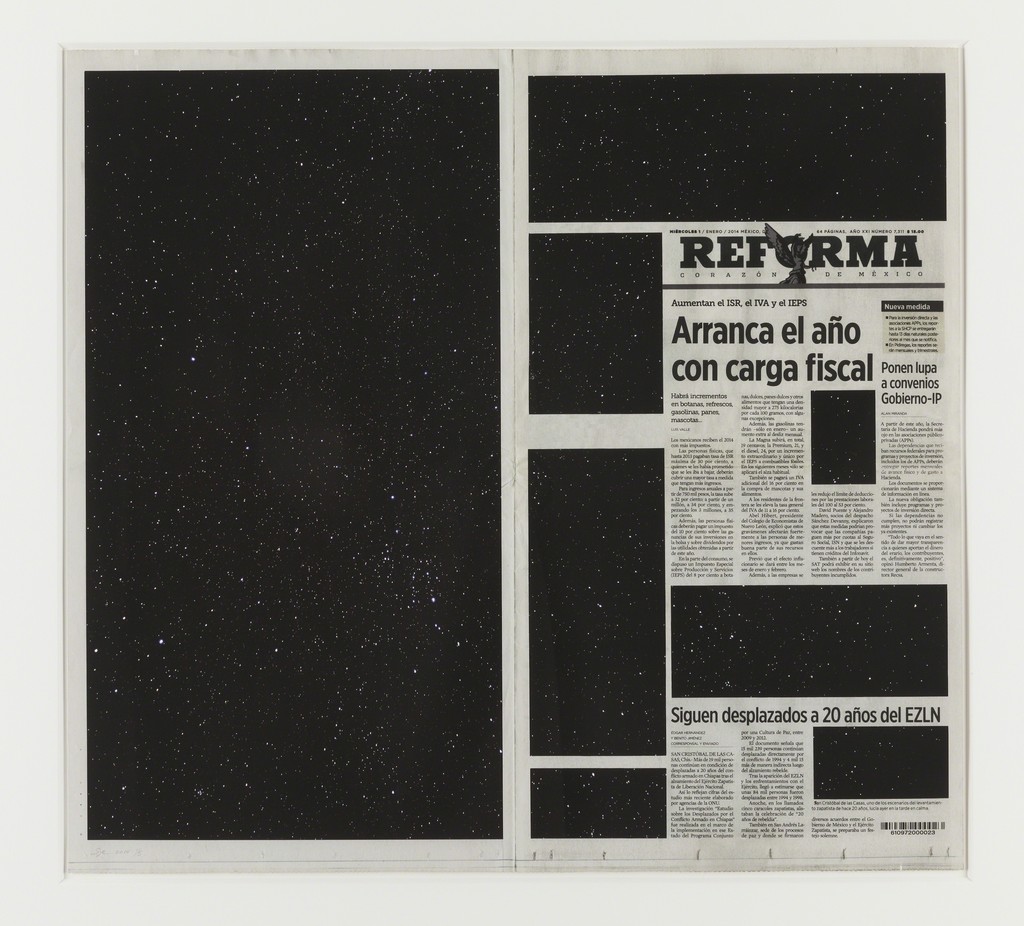 Using found structure (such as the grid of a newspaper) John Berger: Ways of Seeing 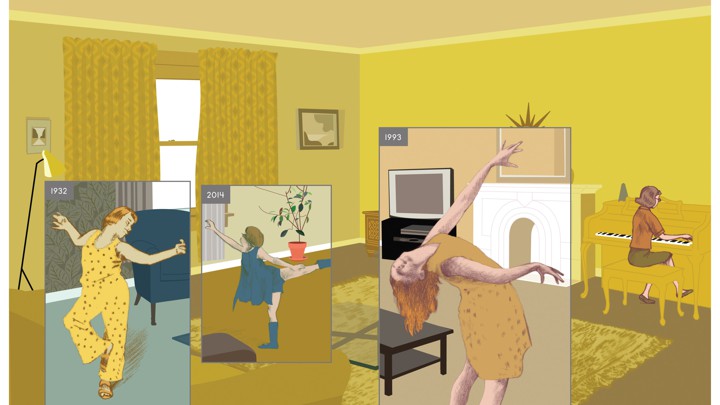 Richard McGuire is looking at the same corner of a room in different time periods. Using time, layering of different narratives.

Hollis Frampton (1971): Nostalgia. Frampton shows early photographs of himself burning on a hot plate, while a narrator talks about the previous image (which just got burned).

A Spiegelman comic in early in raw magazine plays on a similar idea, with character talking about what happened in the last panel:

Art Spiegelman (1973): Don’t Get Around Much Anymore. Slate

Cindy Sherman's Instagram is a visual essay in some way (even if maybe unconsciously). She's one of the rare old-school artist who's doing good things on Instagram.

Using digital platforms to inform visual essays can be useful. The Instagram grid is a visual grammar you can make use of.

Visual Essays don't have to happen in a book — see Nostalgia.

There is no specified format and we ask you to think carefully about appropriate outcomes for your visual investigations. This might extend to book, wall based, object based and projection based work.

I talked about the way the mosaic photographs were made — moving the USB microscope along the surface millimetre by millimetre (within a 1' by 1' square I defined). The movement was then repeated in Photoshop when I stitched the images together. The final collages were laser-printed at a large format for the crit.

I did secondary research on lichen in a number of different directions — there's the British Lichen Society, and also the database of lichen sightings which they contribute to. I mapped a section of the database onto a map of London, but unfortunately the sightings don't all have individual coordinates associated with them. Instead they're all grouped into maybe a dozen sets of coordinates which I'm sure has a good reason, but doesn't make for a very nice visualization.

The Natural History Museum has one of the largest collections of lichen specimens in the world, containing about 400.000 items. They're beautiful: 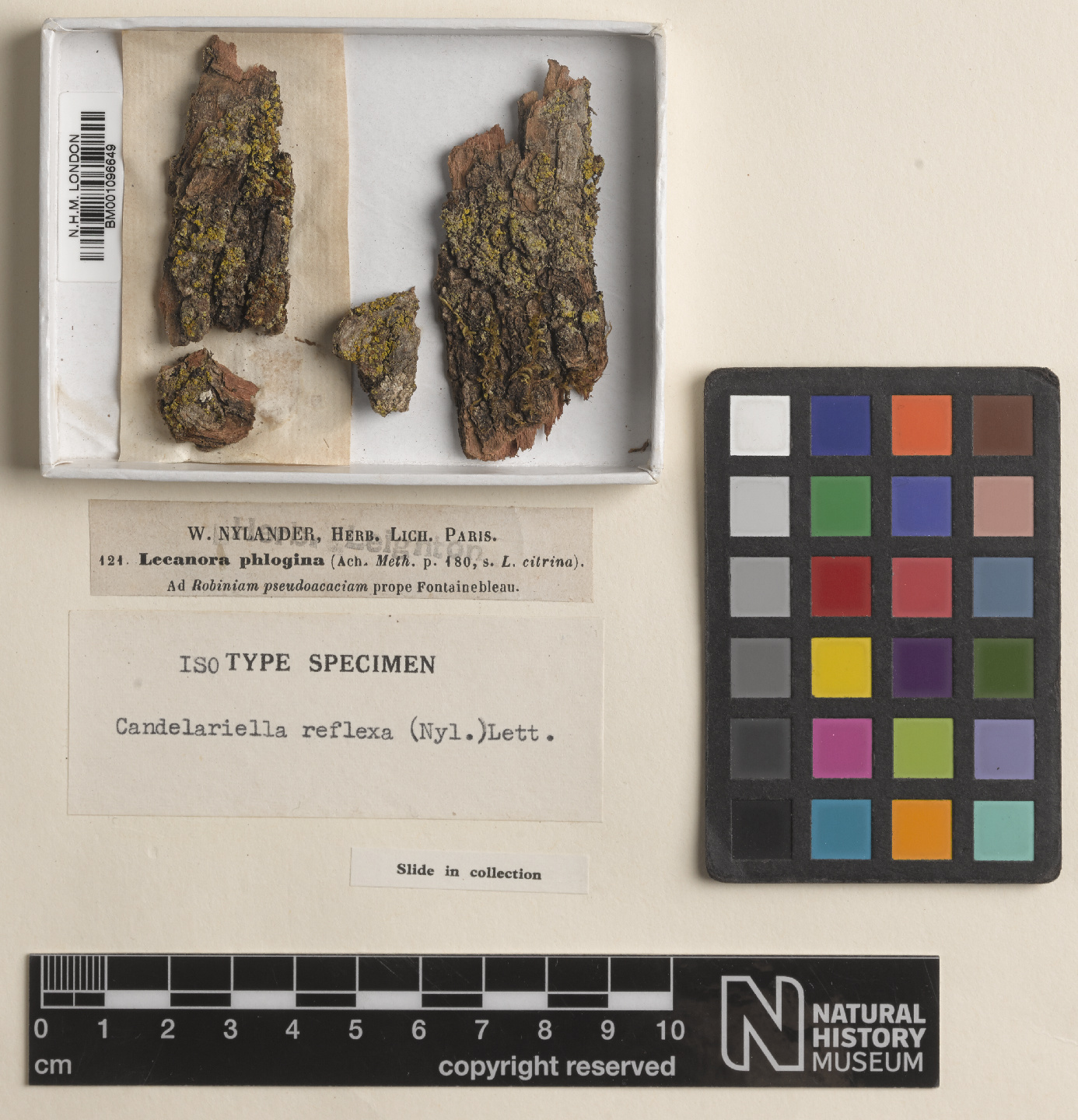 I'm also still interested in diagramming the embankment in different ways, maybe developing this drawing I made at the site: 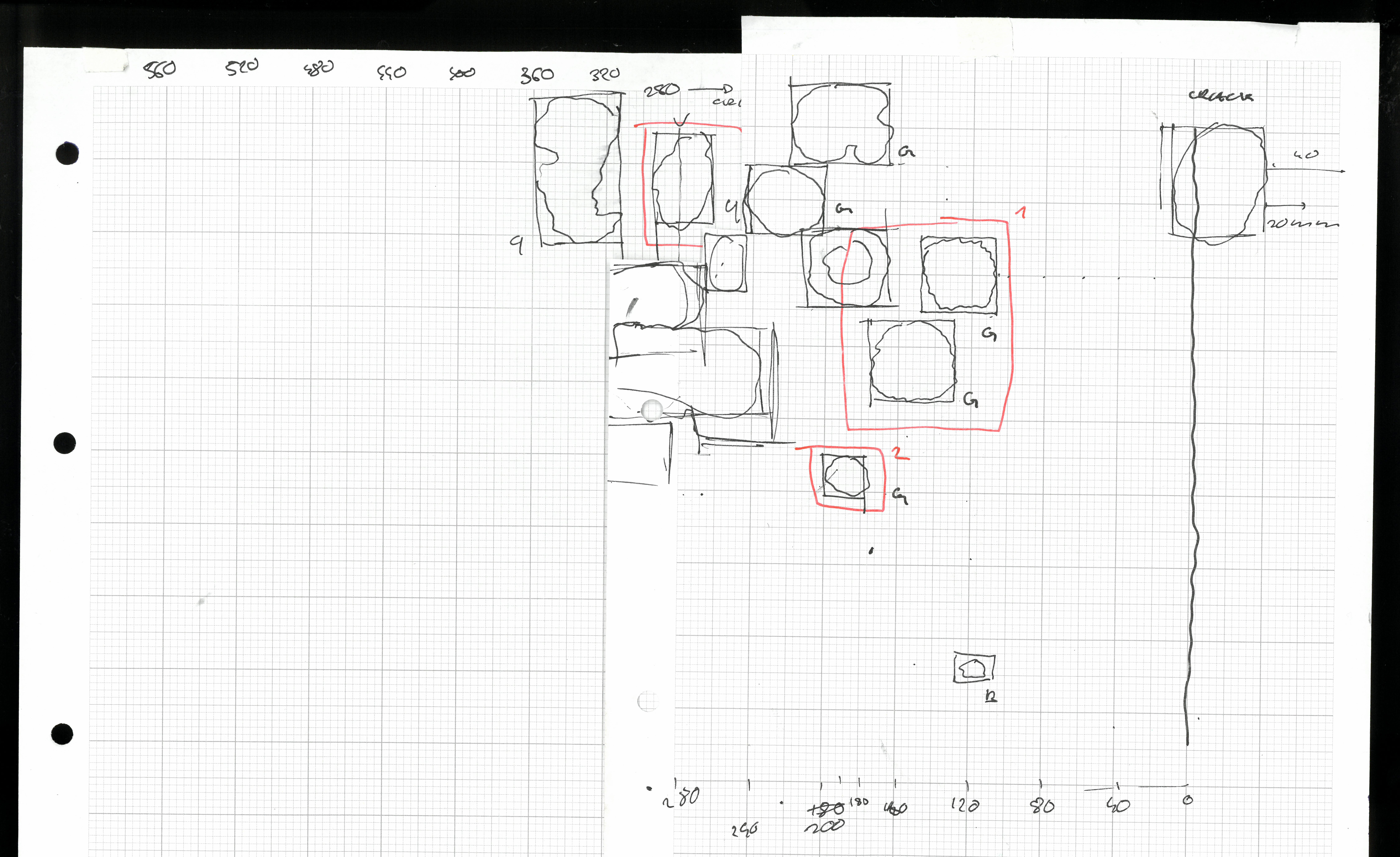 Eventually, I decided to focus on the Turing Patterns. I wrote a Javascript implementation of the Gray-Scott algorithm so I could control everything about the simulation. After experimenting for a while, I found a few sets of parameters that led to patterns that matched the lichen photographs very closely. I then wrote a Puppeteer script that takes a screenshot of the simulation every few seconds. Using the script, I generated a series of images using different parameters. I then printed and bound these into a book in chronological order:

The book is designed to add a secondary voice to the argument. There is also the idea that the book maps a single environment as it changes over time (while the photographic collages move across the surface spatially). I'm imagining it like this:

A: Photographic collage, B: Turing-Pattern book.

Hi All, It was great to see your responses to ‘Image’ in last week’s review session and to share ideas, thoughts and comments within your groups. During Across RCA, please complete the primer task attached. This will inform the next session, a workshop to begin our exploration of 'Materiality'. We introduced some background ideas at the end of our last session and here are the reference links if anyone would like to watch the short films again;

The brief is to find a Process, a Material, an Object and a Tool and write a few words about each. It also suggests to think of these as seperate things, so that's what I'm doing below:

I have personal experience here of course. I remember learning to tune your own violin to be a pretty big step, and it took me forever to learn how to do it. Part of it is hearing: First, you tune your A string to whatever reference you're using — another violin, a tuning fork or a piano. Then, you adjust each string to the A string - first the D, which is a fith below A. Then G, a fith below D. Finally E, a fith above A. There's also a muscle memory component — how do you hold your hand on the pegs to achieve the right amount of leverage? Unlike guitar tuners, these are just tapered pieces of wood stuck into a hole.

In orchestra performances, every player goes through this process at the beginning of a performance. It always happens the same way: Orchestra walks on, Applause, Orchestra sits down, Concert Master walks on, Applause, Concert Master turns around — this is the command to tune. It always happens in the same order: Wind, Brass, Strings from low to high. Finally, conductor (and soloist) walk on.

What the Enron Corpus Says About Us I originally found this during by undergrad at Camberwell, but didn't really do anything with it at the time.

I consider databases like this one materials because they're the stuff algortihms are made from. By themselves, there basically useless — many contain many more instances than you could ever look at in a lifetime, and they're usually pretty monotenous. They only become meaningful when they're turned into something.

We spent the morning handling the material and arranging it by various criteria: 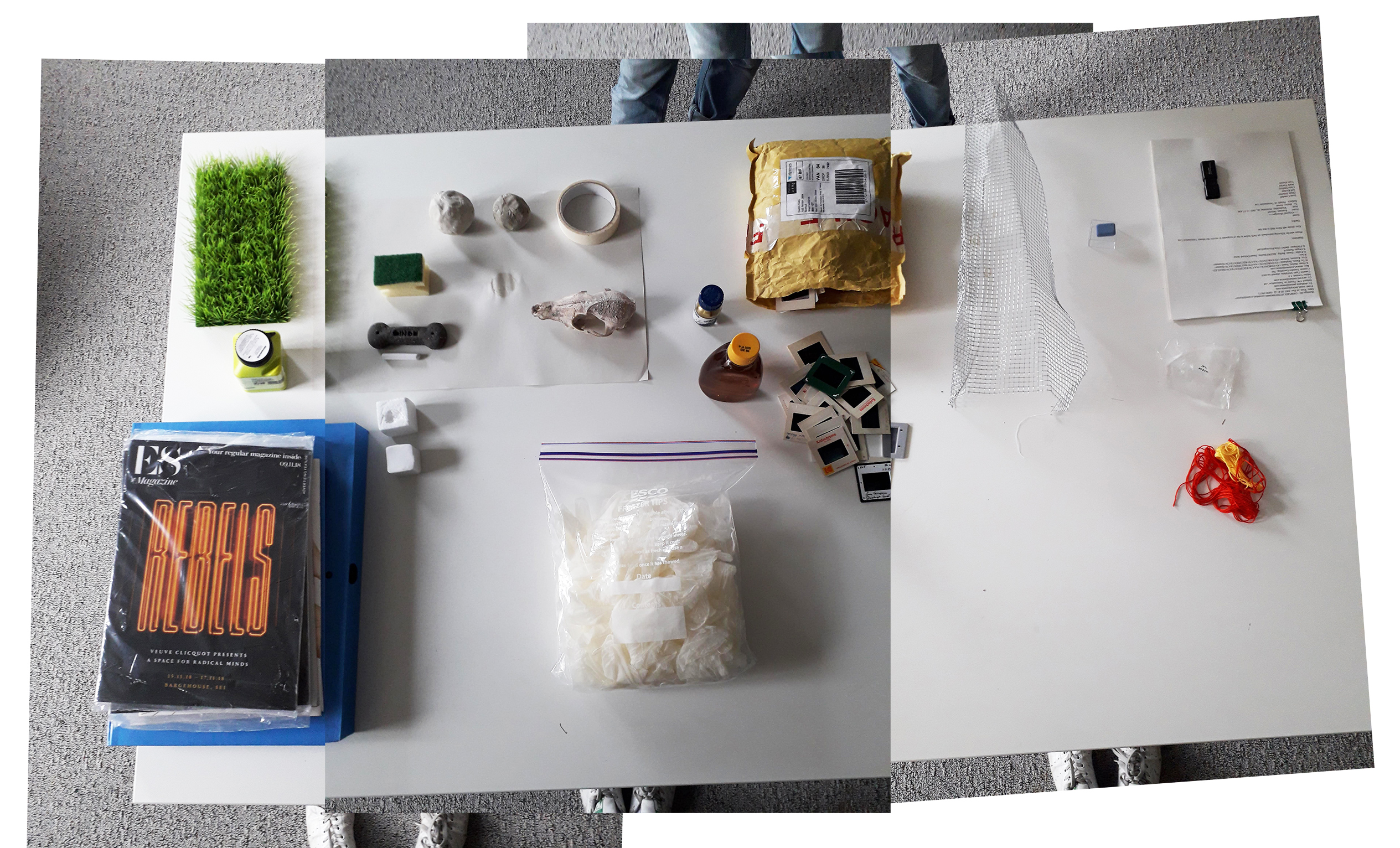 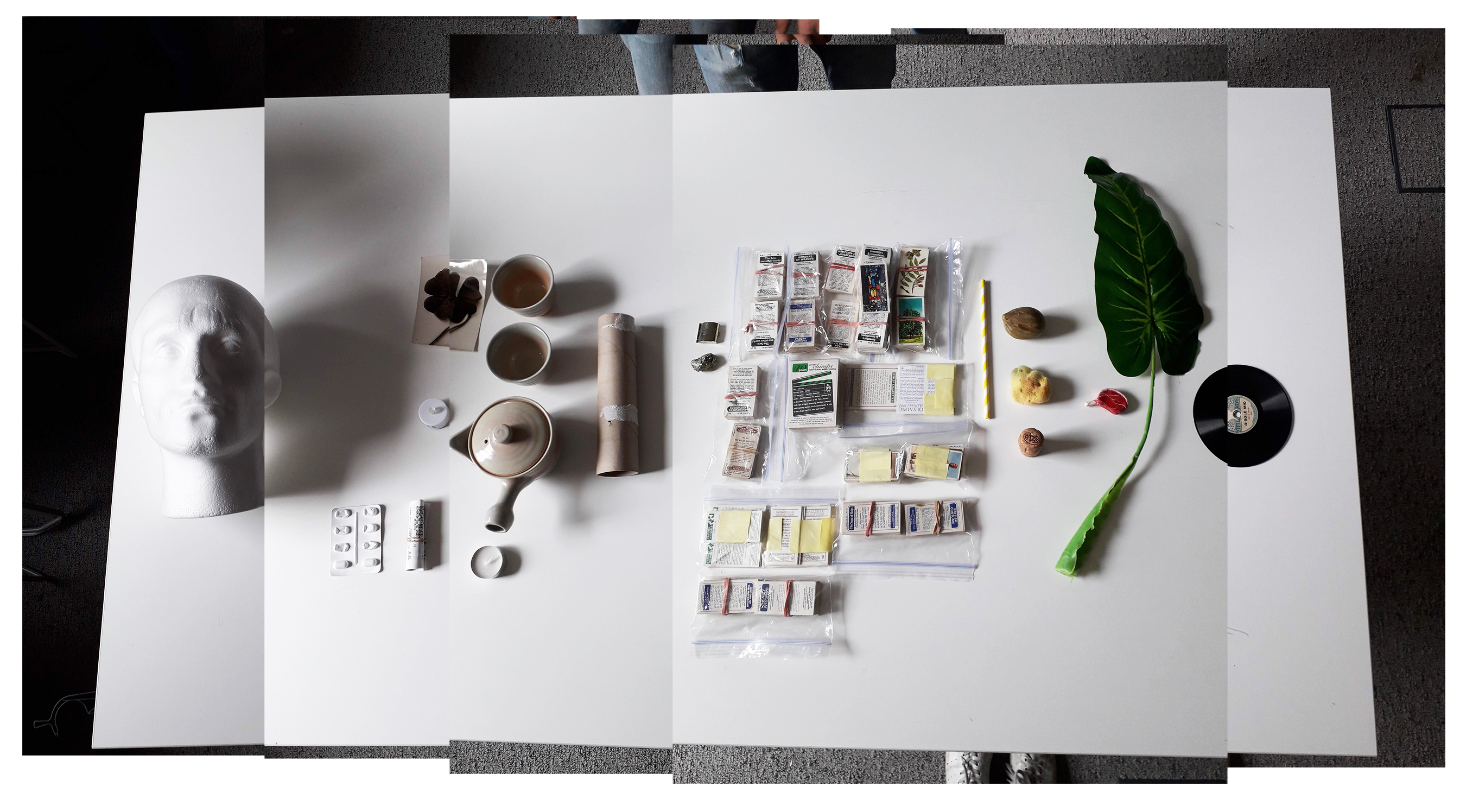 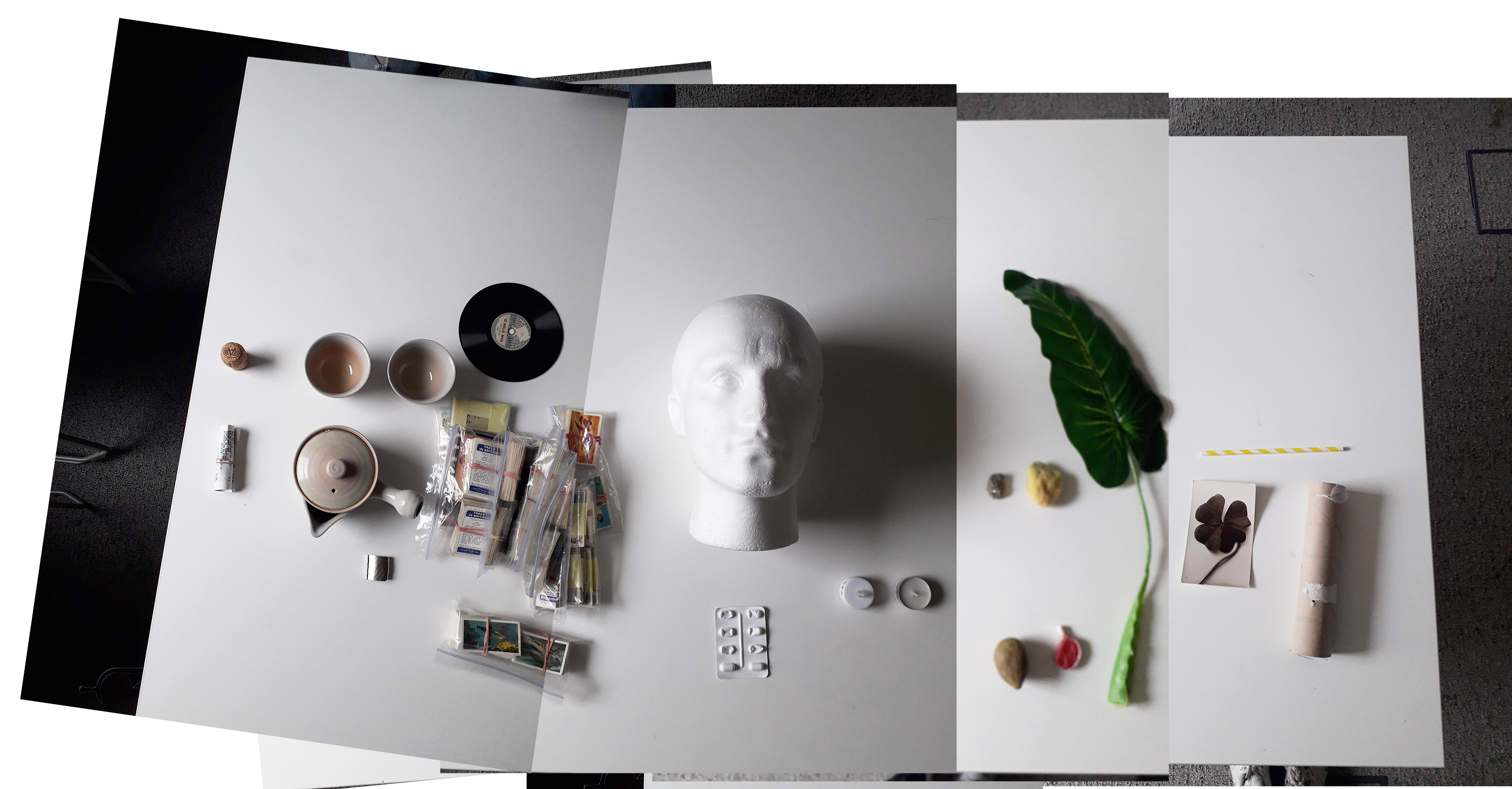 The task for the next session is to generate a visual outcome on an aspect of materiality in time/space.

![Maths notes](/assets/cabinet_053_hunt_katherine_002.jpg) “The strange operation & mistery of numbers.” Peter’s Mundy’s notation of all possible changes on three, four, five, and six bells in his travel journal “Itinerarium Mundi.” Entry made after Mundy’s visit to London in 1654. [Cabinet Magazine](http://cabinetmagazine.org/issues/53/hunt.php)

Reflect on all work produced as part of VISUAL FORENSICS through IMAGE, MATERIALITY, COLOUR, LANGUAGE. Include (physical) examples of all work. What worked? What was a surprise? What did you uncover? Did this constitute a step forward in your working methods? What connections have you observed in your approach to the module? Have any threads emerged?

What are the key-themes, aspects, processes and/or concepts informing your practice?

What have you been reading or looking at during this module?

What is your relationship to the idea of 'FORENSICS'? How are you using, interrogating, understanding and developing this idea?

Friday 1 March: Is this Tomorrow?

Is this Tomorrow? at the Whitechapel is a re-creation of the 1956 show called This is tomorrow. From what I understand, that one was full of post-war optimism (this is the time of the great social projects) while this one seems much darker.

Notes on the Canal Museum Show

We understand that the work might change and we are not expecting you to know exactly what the work will look like at this stage but this statement of intent will be really useful in helping develop the work in the coming months and in curating the exhibition/event.

The building used to be a storage facility for ice blocks imported from Norway. 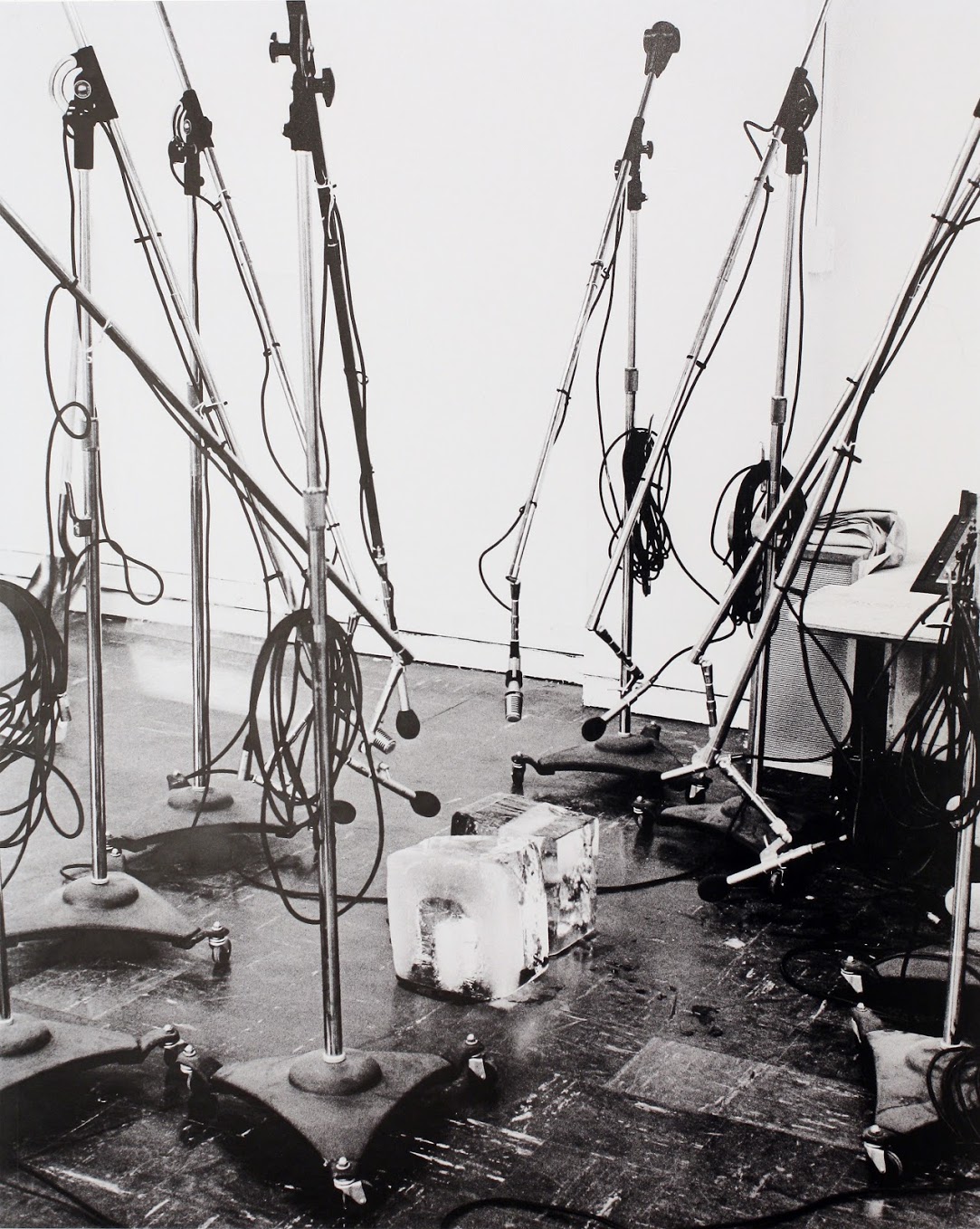 This piece was originally made in response to the Vietnam War (The microphones recall a press conference), but now the immediate association is climate change / the anthroposcene. Kadist on the piece. 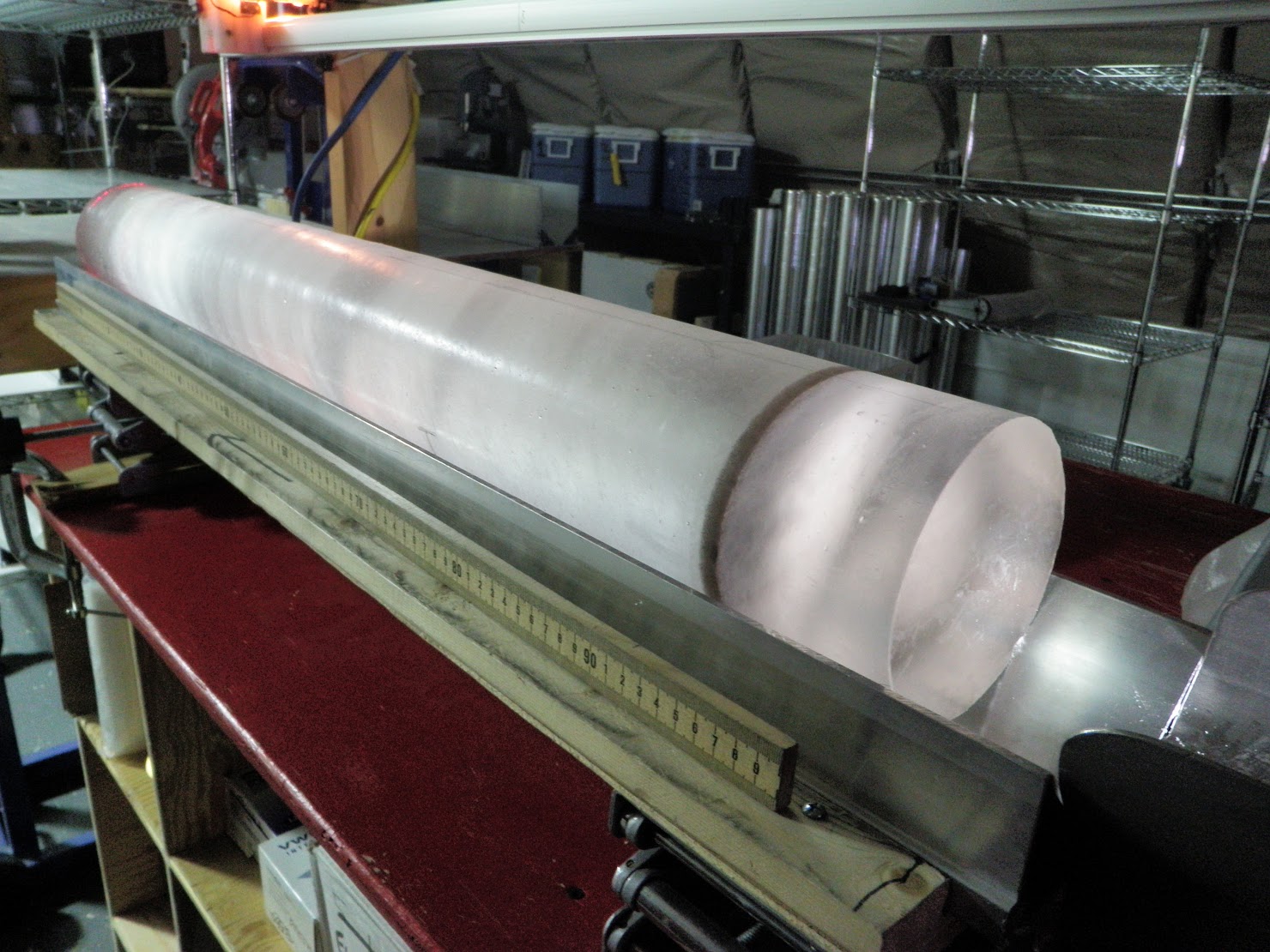 Ice core from the West Antarctic Ice Sheet project. The dark band is a layer of volcanic ash that settled on the ice sheet approximately 21,000 years ago. Via the National Science Foundation