The central Artefact of [Bertillion's] archive is the filing cabinet, not the photograph.

Archive as a body of literature independent of the objects inside it. All the descriptions, titles (written by archivists, not artists), but also categories, access status, reference numbers and so on.

Microfilm Lasts Half a Millennium in the Atlantic

The search function has boolean logic: Heading must contain (term A AND term B) or (term C). Archive arithmetic.

There is a big long list of uncatalogued items. Must be hundreds, of not thousands of boxes. http://archive.tate.org.uk/TateArchiveUncatCollList.pdf

Things are organised on different levels:

A search for 'test' gives a few more of these. There doesn't seem to be a way to link to a search results page.

The website runs on something called DServe, which seems discontinued. Used to be made by Axiell. https://www.axiell.com/uk/solutions/archiving-software/

They sell all kinds of stuff for libraries and museums, including things like post-it notes.

The photographic collection (TGA) has images of all kinds of exhibitions, including random people's private collections. http://archive.tate.org.uk/tgaphotolists/TGAPHOTO7PrivateAndCorporateCollections.pdf

Some documentation on the digitisation process: https://www.tate.org.uk/art/archive/archives-access-toolkit

Empty pages: Stuff that gets archived kind of by accident. Things between the historically important stuff.

People wrote so many letters back in the day -- are we keeping artists' emails now?

Looks like things are kept in thr arrangement in which they're acquired (Collections). So, for instance, TGA 871 has some stuff from JMW Turner's studio, but also letters from the 1960s and someone's MA dissertation. Even when a collection comes directly from an artist, it often contains ephemera, letters from other people, reproductions of work, newspaper clippings and such. A collection of collections of collections. 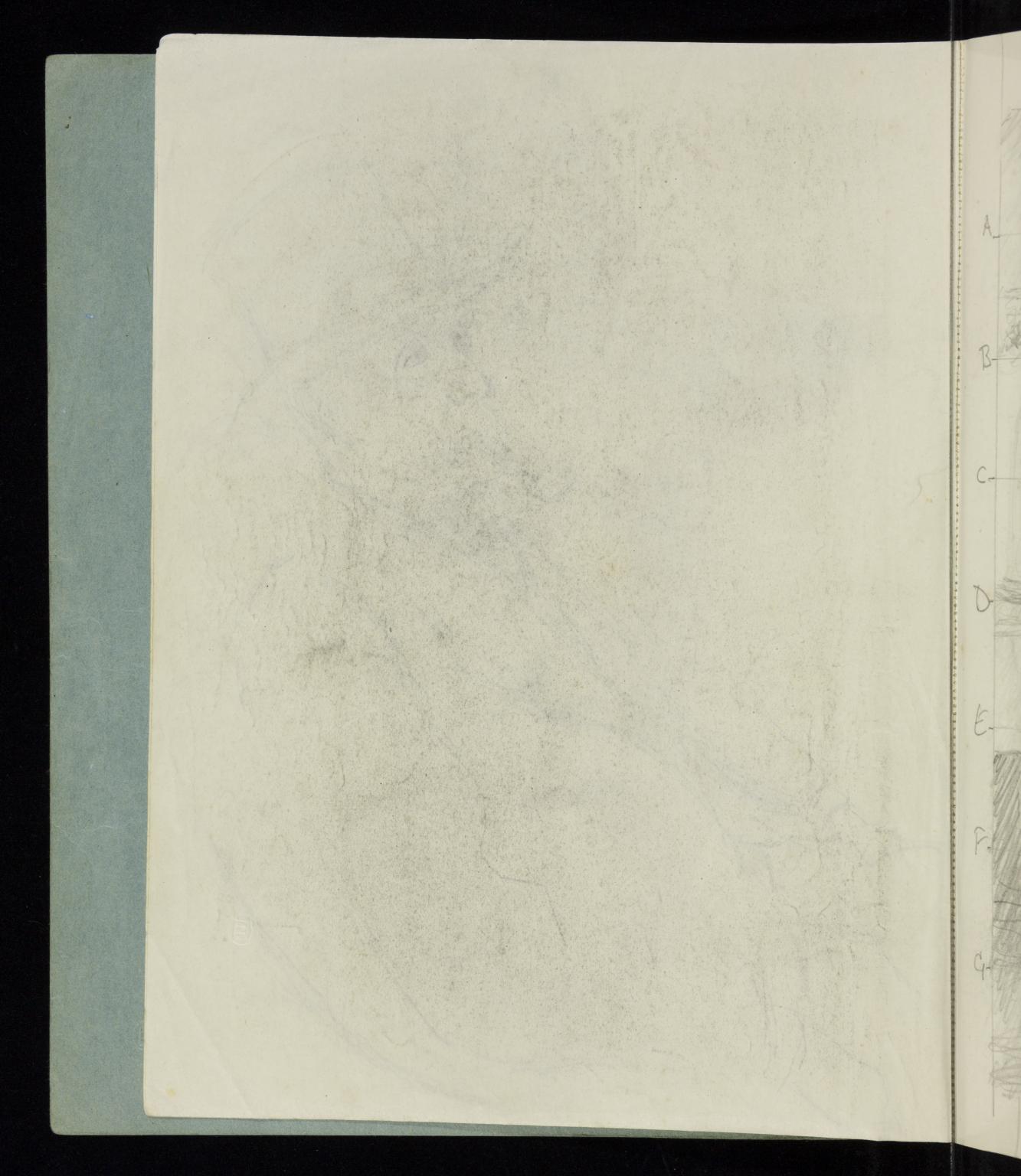 The images have titles and other meta information in the EXIF fields. Digital image: more than just a visual record, has metadata baked right into it.

Who picks the featured images? I guess some of the goal here is to generate engagement (that's also what the process writing talks about).

Archive items are tied in / cross-referenced with other Tate data structures: Artists, finished works (which appear to live in a separate database, interesting where the distinctino lies there), "Features" (which are articles), and related artists (chosen by who knows what algorithm), tags.

Some things have lost all their context:

Everything has different licensing attached to it. Every item wound up in countless systems, paper trails 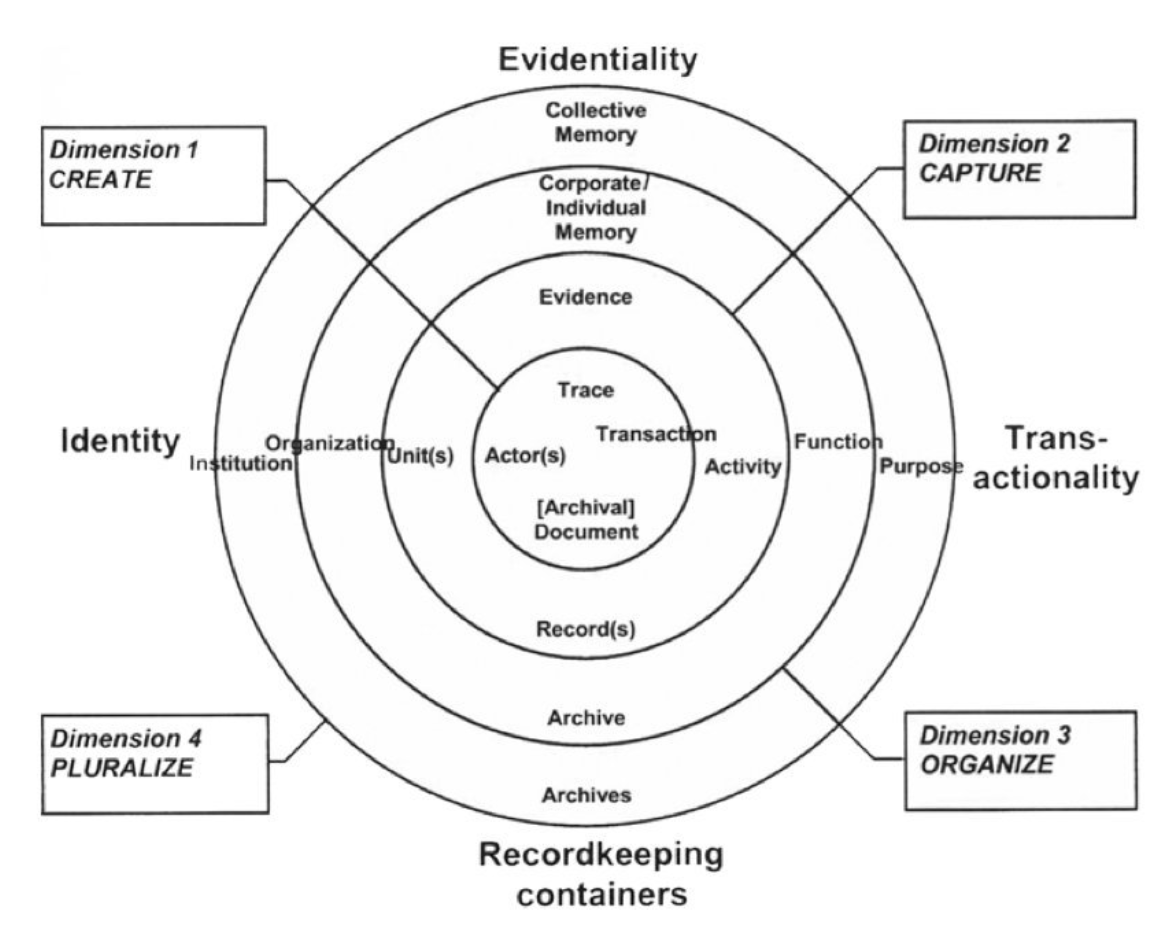 Spent an hour photographing shelves in the store — about 800 images in total, some usable.

These ambiguities, redundancies and deficiencies [in Wilkin's constructed language] remind us of those which doctor Franz Kuhn attributes to a certain Chinese encyclopaedia entitled 'Celestial Empire of benevolent Knowledge'. In its remote pages it is written that the animals aredivided into: (a) belonging to the emperor, (b) embalmed, (c) tame,(d) sucking pigs, (e) sirens, (f) fabulous, (g) stray dogs, (h)included in the present classification, (i) frenzied, (j) innumerable,(k) drawn with a very fine camelhair brush, (l) et cetera, (m) having just broken the water pitcher, (n) that from a long way offlook like flies.

Obviously this isn't real (because that's what Borges does).

Foucault comments on the passage at length in The Order of Things (1966) saying the reason this is so funny/uncomfortable is that we can't imagine a space in which all of these categories can exist at the same time — they have no shared criteria, rules of sameness.

Fairly straightforward to go through all the second-level entries in my dataset and output lists of fields like Access Conditions and Acquisition History. Visually, this starts to resemble works like Codenames (2001) by Paglen, 5.12 Citizen's Investigation, and the list of migrants who died on their way to Europe. 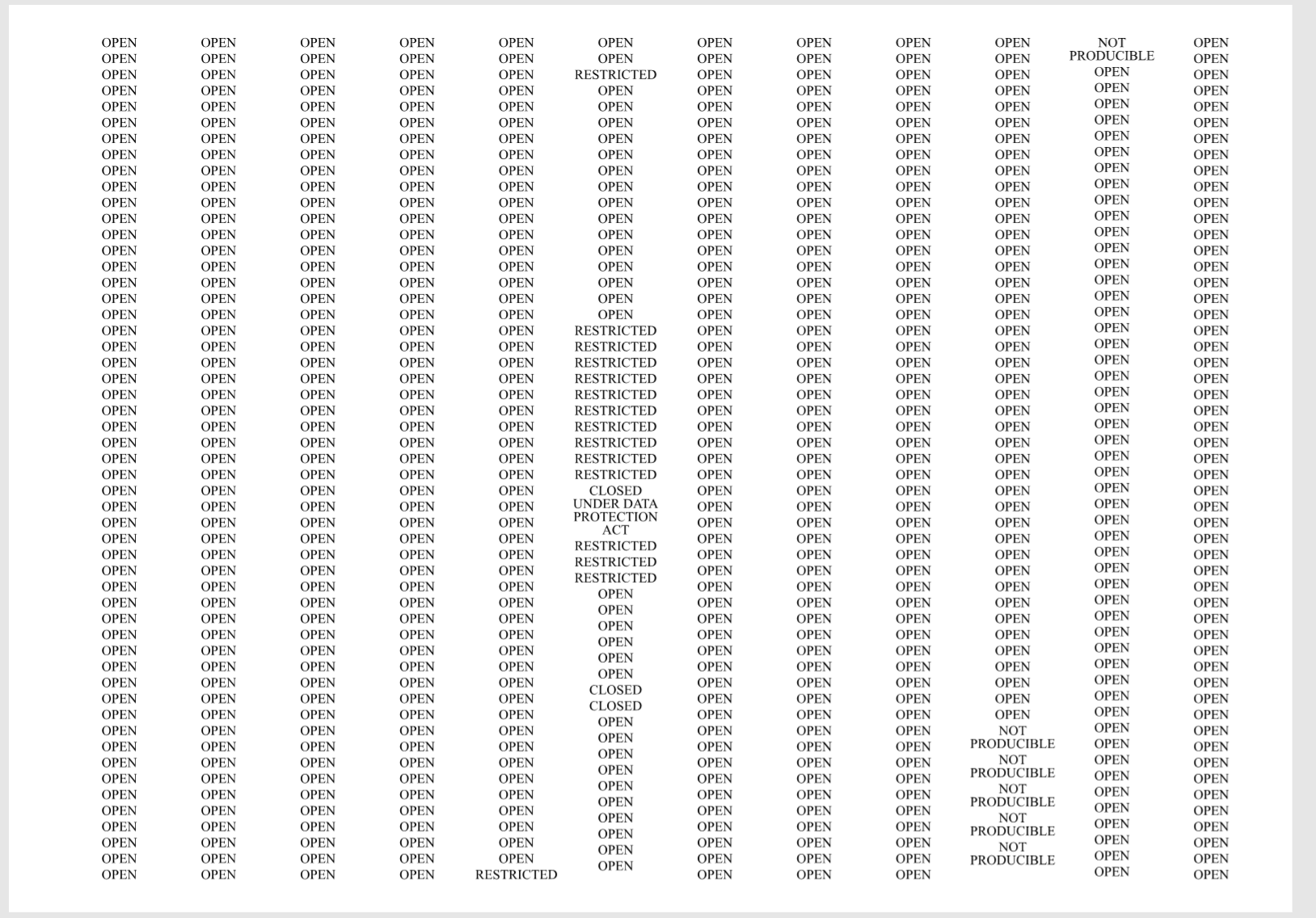 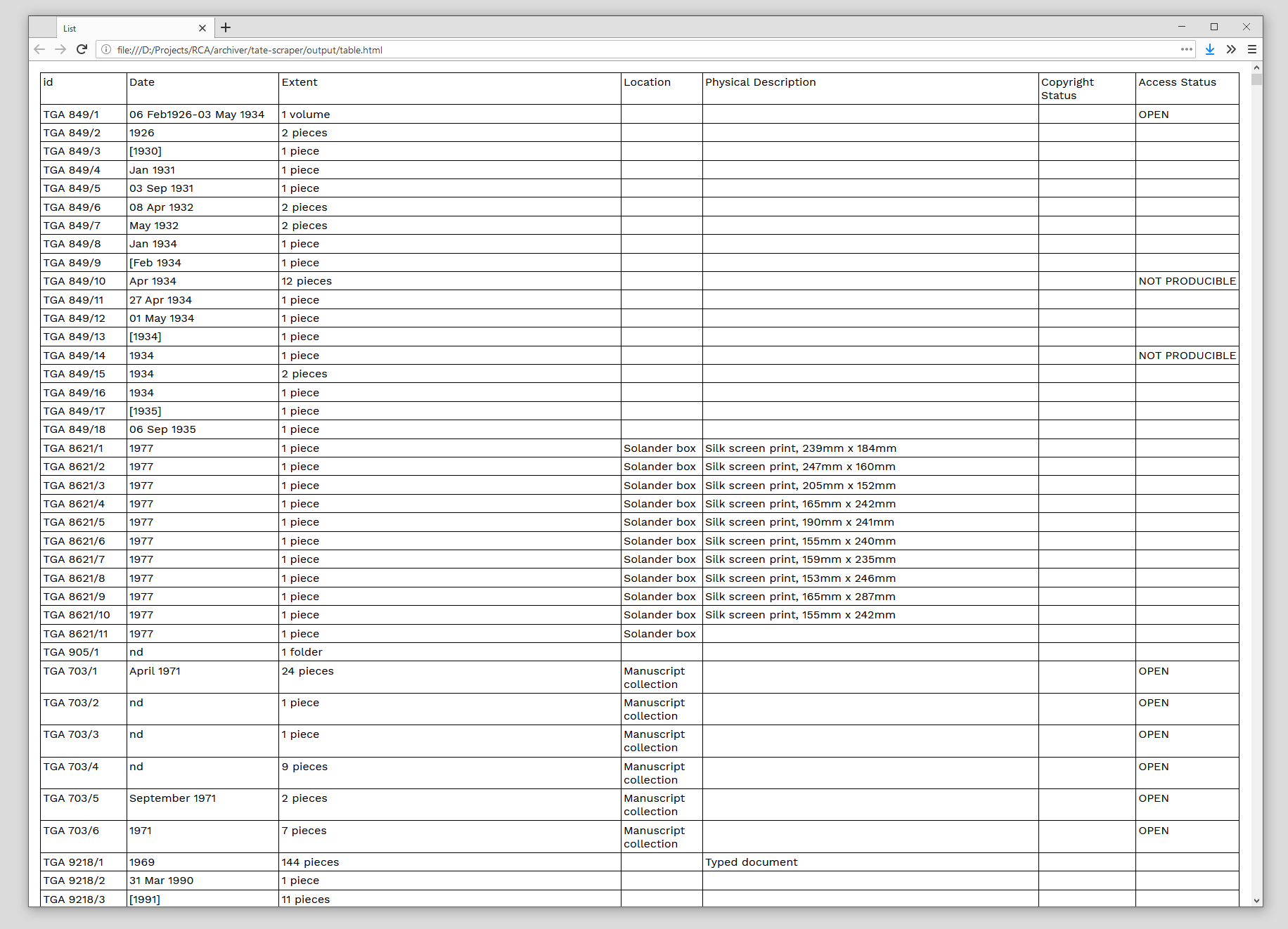 Scraped catalogue rendered as a long table. Note that not all data fields are represented here. 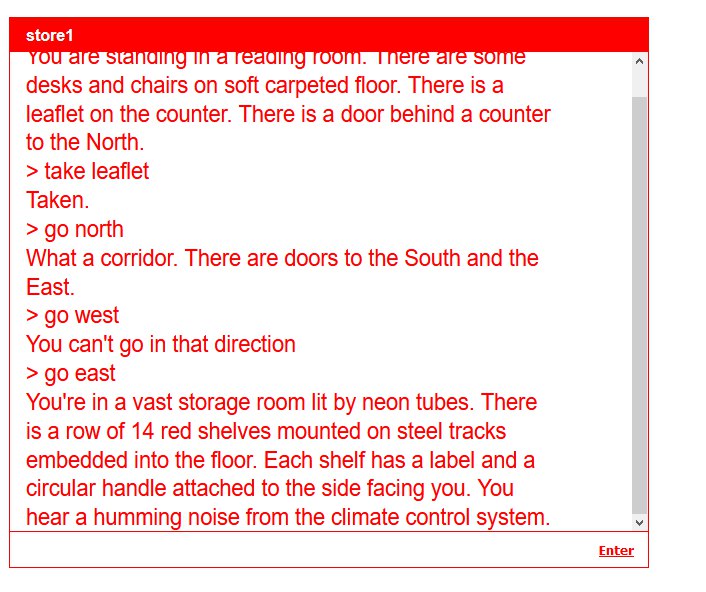 Text adventures are a textual representation of some imagined game world (not unlike the archive itself).

The setting of an interactive fiction work [...] is more than a setting. It is a simulated world, which in practice is represented computationally in some sort of data structure or collection of objects. It is this simulated world that distinguishes a work of interactive fiction from a conversational character or from an expert system that employs natural language understanding. viii

The world model is typically implemented in the interactive fiction program as some type of graph [referring to the mathematical model, which also aplies to the archive!] or tree structures of some sort (eg record, object, list) with associated procedures, methods, or functions (Graves 1987). ix

1: The pleasure of the text adventure

The person who reads and writes to interact is the "operator" of an interactive fiction in cybertextual terminology (Aarseth 1997); in general computing terms, this person is the "user". So as to emphasize that the actions of reading, writing, playing, and figuring out are all involved in such operation or use, the term "interactor" is used in this book. 3