I started using Netlify a few weeks ago, and I've already gotten very used to the workflow it enables you to have:

This workflow feels so good to me that I want to have it on every one of my projects – including the few Wordpress websites I work on. You can't just throw a Wordpress site onto Netlify (unless you go the headless CMS route, but that's a different story), but you can still have the nice workflow by leveraging Github's own build system: Github Actions.

While Netlify's build process feels very much designed to build and deploy the website when you push to the repository, Github actions can pretty much do anything you want on any event that can happen in a git repository. That's powerful, but also means that they need a little more configuration.

You set up an Action (or Workflow – the terminology is a little confusing there) by creating a YAML file in a special folder called .github/workflows at the root of your project repository.

The on key at the top of the file tells Github when to run the workflow. In this case, that's whenever I push to the main branch.

Then you describe what work you want the workflow to do. Per Github's documentation:

Workflows must have at least one job, and jobs contain a set of steps that perform individual tasks. Steps can run commands or use an action. You can create your own actions or use actions shared by the GitHub community and customize them as needed.

My workflow here has one job called deploy with four steps:

The last step is interesting: How does the gulp task know how to FTP into my server? I certainly don't want to put my login credentials into my repository, but how else could I tell my build process about them? Turns out Github has a mechanism called secrets that's designed just for this purpose.

Instead of storing the secrets inside your repository (which, again, terrible idea), you go into your repository's settings on Github and enter them there, where they're stored safely and well-encrypted. The interface looks like this:

Then, you can acess those secrets during your workflows by adding them as environment variables to individual steps – that's what the env property in my YAML file does:

Those environment variables make it all the way down into my gulpfile, where I access them using process.env:

This totally works! Whenever I push to the repository, the action is triggered and I can follow its progress through this nice UI Github gives you: 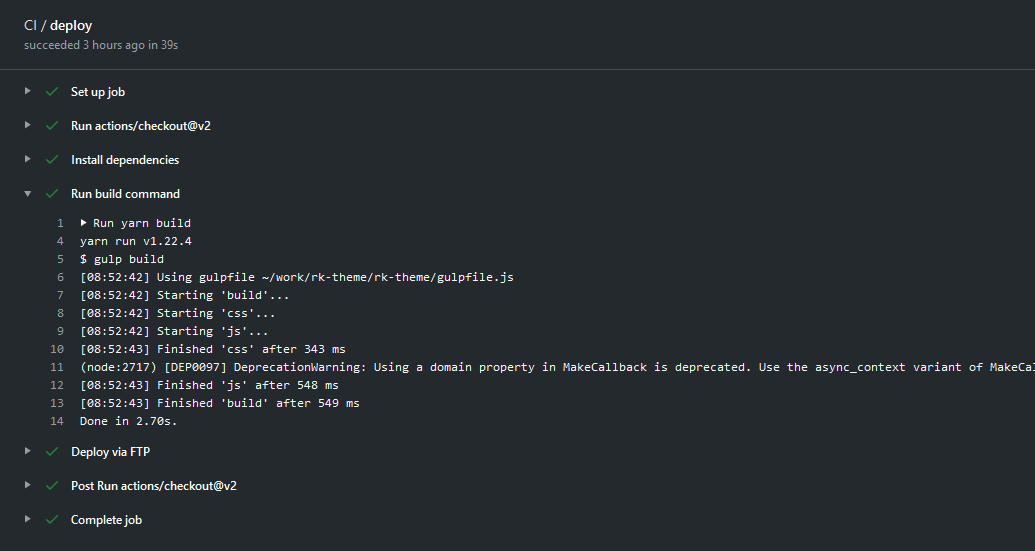 My process for working on Wordpress sites now looks like this:

Just what I set out to do.